This is an unprecedented time for our beautiful state of California. I know that so many people only see the ridiculous gun laws that make up California and many others are trying to flee our state to get away from them. What you don’t see is that there are over 2 million children living in our state. Many like my two daughters are growing up in an outdoorsy family who teaches responsible gun ownership as well as hunting and conservation. This new law, AB2571, is absolutely unconstitutional! Because of this law, many youth shooters cannot talk to sponsors and some have even lost their sponsorship. Youth trap programs here in Norcal have been cancelled at schools, youth camps with firearms safety are being cancelled. They have made the law so vague that the gun and hunting industry is afraid to do anything with our youth in California. And it makes it impossible to reach the kids who are not growing up in a 2A family. Many of these programs were geared towards those kids!

This is the time for us to stand up and fight for our 2nd Amendment Right!

The fine is $25,000 per occurrence if a company promotes or markets a gun to a child. If our children aren’t learning firearms safety from responsible gun owners, where are they going to learn it? From the video games where they shoot people over and over again and death means nothing? Or they don’t learn about it and they don’t understand the responsibility that comes with gun ownership and that is how accidents happen! This is the time for us to stand up and fight for our 2nd Amendment Right! They are trying to take it away little by little and they aren’t even being subtle about it anymore. If they remove the gun rights of children in one state, your state may follow and the next thing we know an entire generation doesn’t know how to safely and responsibly handle firearms.

Thank you to Sportsmen’s Alliance for standing up to this unconstitutional law and filing a lawsuit against the State of California!

Scroll down to read the breaking news and details of the law suit from the Sportsmen’s Alliance blog. 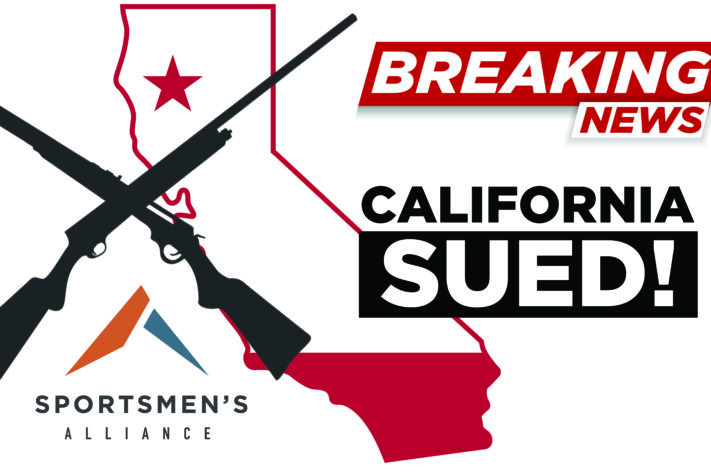 Although described by Gov. Newsom and supporters as a prohibition on marketing the sale of firearms to youth, the new law goes well beyond direct advertising to include any marketing activity involving firearms and firearm accessories. This includes not only the purchase of firearms, but lawful use. The law’s broad terms also prohibit marketing hunter education, school-sponsored firearms teams, youth hunts, youth camps that include firearms training and even short seminars or “how to” events. The law is so broadly written that it bans social media, leaflets or flyers, videos, magazine articles or any other communication that showcases or illustrates the use of firearms by youth.

Because of its overly broad language, the new law does more than just violate constitutional freedoms – it decimates youth firearms training and education in the state. Whatever the intent of its sponsors, eliminating youth safety programs is the only foreseeable result.

“Our entire youth education program is on hold because of this law,” said Paul Cain, president of So Cal Top Guns. “Thousands of kids have learned firearm safety and have competed at local, state and national events for decades – and now that’s all gone.”

“Whether or not intentional, this poorly written and misguided law is already directly impacting hunting access for young people,” said Ben Cassidy, Safari Club International’s executive vice president of international & public affairs. “As a community, hunters have worked for decades to provide hunter safety and education for the next generation of hunters. This law directly undermines a critical community service.”

Signed by Gov. Newsom on June 30, the law imposes fines of $25,000 per impression, occurrence, or publication of prohibited communications. Introduced by Assemblymember Rebecca Bauer-Kahan, the law casts a wide net over any youth program that promotes the use of firearms by a member of the “firearm industry.”

The bill defines “firearm industry” broadly to include organizations formed for the express purpose of “… promoting, encouraging, or advocating for the purchase, use, or ownership of firearm-related products,” which could encompass any organization conducting hunter- and firearm-education classes or youth hunts and shooting matches of any kind. Many conservation organizations hold summer camps that include hunter education or firearm-safety training – all would likely run afoul of the new law.

“This law is a prime example of rushing action without fully understanding the consequences,” said Jeff Crane, president & CEO of the Congressional Sportsmen’s Foundation. “By significantly impacting the sporting-conservation community’s ability to effectively recruit and train the next generation of sportsmen and women, this law will have far-reaching consequences on the very funding structure that underwrites the conservation of California’s wildlife and their habitats. All people of the state, not just hunters, should be outraged that this law is now on the books.”

“This law is a travesty that clearly violates several constitutional protections at once, while, ironically, undermining well established safety programs and education,” said Todd Adkins, Sportsmen’s Alliance vice president of government affairs. “In their haste to politicize firearms, Gov. Newsom and the legislature have destroyed youth education and firearm-safety programs that have long been supported by Californians.”

While the new law does not prohibit activities themselves, the result is a de facto ban because it is difficult to hold youth camps, competitions, clinics or hunter education classes without some form of promotion of these events.

“The law and intent of its author and Gov. Newsom is clearly discriminatory and meant to destroy our hunting heritage,” continued Cassidy. “The conservation community has a long history of protecting hunting while encouraging safe and responsible firearms use. We are proud to continue this tradition by fighting this irrational and unconstitutional overreach by Gov. Newsom and his supporters.”