Nowadays, it seems like everywhere you look, someone is offended by something, especially the actions of historical figures and the significance of historical events. Rather than abiding by the old saying, “Those who do not learn history are bound to repeat it,” they instead want all historical symbols and evidence destroyed and history books all but rewritten in an attempt to right a previous wrong.

Worst yet are those who look at the actions of a small number of groups on the fringe of society – those who have taken historical symbols and repurposed them into symbols of hate – and now proclaim that the historical significance is null and void and that moving forward, a once patriotic symbol may only be used as a racist symbol of hate and exclusivity.

For those who are unaware of the significance behind the Betsy Ross flag, named for the famous Philadelphia upholsterer and flag maker Betsy Ross (credited with convincing General George Washington to trade the more difficult six pointed stars for the easier to cut five pointed stars), the Betsy Ross flag is considered the first flag of the newly formed United States of America, and features 13 stars and 13 stripes to represent the 13 colonies who came together to overthrow the oppressive reign of Great Britain.

Kaepernick’s objection to the Betsy Ross flag comes from its weak use by radical extremist groups like the Ku Klux Klan (KKK) and the anti-government militia movement (but not enough to earn a spot on the Anti-Defamation League’s “Hate On Display™ Hate Symbols Database”). Unfortunately for Kaepernick, its use as a symbol of hatred and racism is far outweighed by its use as a symbol of patriotism and democracy during the birth of our great nation. It’s been such a significant symbol of American history that it was flown not once but twice as a back drop for the second inauguration of our 44th president, Barack Obama, in 2013.

Thankfully, here in America, we have this pretty cool little thing called the Bill Of Rights and the First Amendment, which protects our right to free expression and free association. While that means that Kaepernick and Nike are free to express their opinions of the Betsy Ross flag, it also means that we are free to express our love for one of the most patriotic symbols of American perseverance in our nation’s history. Anyone can take a symbol of freedom and choose to use it for hate. We have chosen to honor Betsy Ross’ contribution to the history of the greatest nation in the world by designing our version of the Betsy Ross Flag Tee. It’s available for pre-order (with an expected ship date of 7/22) and comes in white heather and charcoal heather for only $24.99. 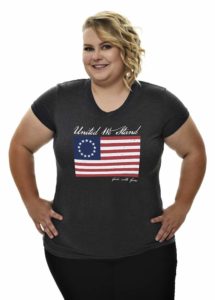 If you’re tired of celebrities and corporations dictating what patriotism is supposed to look like here in America, then let’s use our First Amendment freedom to proudly support the Betsy Ross flag and its historical significance in the creation of this great nation.

One thought on “The Betsy Ross Flag: Patriotism, Not Racism”