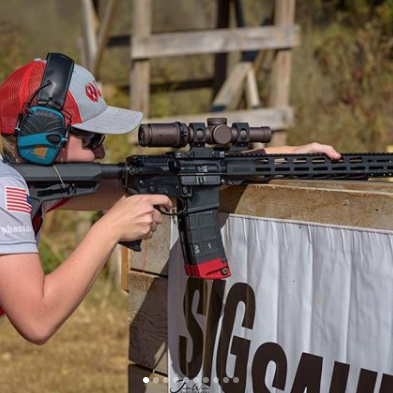 By Beth Walker | Ambassador for Team GWG and Ruger

Hey everybody! I want to start off this blog post with a disclaimer. Truly, this incident went off as well as any of us could have hoped. Two lawful gun owners were able to ensure that their property was not destroyed, no one got hurt, and they exercised their right to keep and bear arms.

What I am wanting to accomplish with the following statements is not to nitpick and make fun of the husband and wife who chose to protect their property, but to shed light on an issue that we are facing in this country.

As a nation, there is a stigma on gun owners. We are viewed (for the most part) as uneducated, rednecks, and people who lack common sense. This could not be further from the truth. In my time as a part of the firearms community, I have met some of the most educated individuals that do not hesitate to share their knowledge with others. They are kind, responsible, and welcome anyone with open arms.

Generally, in the firearms community, we have each other’s backs. We train together, laugh together, and learn together. There is no safer community to be a part of. But we can come across as dismissive to newcomers who may not have the same knowledge and education as us. This can happen for various reasons, ranging from the seriousness that we place on safety to the humorous nature of many of our group.

Overall, this post is meant to call attention to the things that we need to educate on and the shift that our nation must do in its mindset towards firearms education.

I am a HUGE proponent of self and property defense. But the video made me uncomfortable for these reasons:

1) The woman was pointing her gun at protesters with her finger on the trigger. Now, in reference to a recent article that was released, this woman had no prior training but was in fear for her life. (https://www.ksdk.com/article/news/local/interview-man-with-rifle-during-st-louis-protest/63-eeb61c07-4adc-4df0-a7d0-000d40a89e78) This is all the more reason to reach out to your neighbors, family, and friends to train them on basic firearms safety. This woman, Ms. McCloskey, had never had the luxury of training.

2) While pointing her firearm, she was not maintaining a grip that would have allowed for accurate, responsible discharge. The loose grip that she was using actually would be more likely to result in a negligent discharge. As an instructor, there is a reason that grip is one of the first things that I cover. There are many things that can hurt your shooting and your grip is one of them. It can cause malfunctions, pulling shots to the left or rights of your intended target, and more.

3) When walking behind her husband, the woman pointed the firearm at the back of his head, finger on the trigger, with a loose and limp grip that could have put him in danger. As stated in the article above, “My wife doesn’t know anything about guns, but she knows about being scared.” Situational awareness in times of crisis is something that we all need to make improvements on. We are a country full of people who have normalized walking around, head buried in cell phones, with no regard for anyone but ourselves (myself included). Add fear to this and you have a whole separate set of issues. That’s not to say this woman is selfish, but in a culture that has normalized a lack of awareness, it is not uncommon to see these types of incidents that result in unsafe behavior.

4) The issue presents itself when there is irresponsible handling from the beginning and they continue to engage with the protesters rather than de-escalating the situation and potentially remaining in their home… But when in fear for your life, how else would you expect people to react? In analyzing the article that I linked above, it is clear that the protesters had already destroyed property, being the gate to the private community. Who knows what else they would have destroyed? The McCloskey’s lives were also threatened by multiple people. This is a growing debate in the self defense community: Do you stand your ground and meet force with force? Or de-escalate and distance if possible? Personally, I do not believe that there is a right answer and everything becomes situational. Could the family have avoided the confrontation? Possibly. Could their property have been destroyed? From prior evidence, most likely.

This just goes to show the importance of training and being knowledgeable about the use of firearms and the laws in your area. We need to change our culture to normalize firearms education, safety, and the ability to defend yourself, but doing so in a responsible way that doesn’t further escalate potentially dangerous situations. I believe that training is the personal responsibility of a firearms owner. It should not be a requirement to own or carry, but we should all be motivated and motivate each other to be responsible and know how to use the tools that we own.

Due to rising tensions in our nation, this is likely the first of many situations that will mirror this one. There is no doubt that there is a high level of hostility brewing among the people. This does not mean that we should allow ourselves to ever be caught off guard. Coming from an 18 year old female, there are many times that I have felt uncomfortable walking to my car in the dark, pumping gas at the gas station, or just walking through the grocery store. Thankfully, I am able to fall back on training and proficiency with the firearm that I have chosen to carry if my life were ever threatened.

If you are a responsible gun owner and able to share information with your friends, family, and even through social media, I urge you to do so. There has never been a time in my life that it is more needed. I am being approached to teach people in my area that I never thought would want training in my life. If I could get ahold of this husband and wife, I would love to offer them training. It is imperative that we don’t allow people to feel as though we are unapproachable as a community.

If you would like training or have questions, reach out. I am more than willing to talk and help anyone to the best of my ability.

Here is a link to the video that I referenced throughout this post: https://www.instagram.com/p/CCAvmHMBBi9/?utm_source=ig_web_copy_link