On March 29th, I departed for Florida to take part in the first and only Ambassador Training that I have seen within the shooting sports. This training encompasses many things: shooting, social media, interview skills, and even hostile communications with those that are anti-Second Amendment. The unique thing about this training is that it is not just for the top of the line, fully paid sponsored shooter. The mission is to raise up a new generation of positive influencers who can help to grow our community as a whole, not just the upper echelon.

Our instructors were industry professionals who came together to form an amazing curriculum that not only taught us through a lecture style presentation, but allowed us to go hands on and dive into the material ourselves. We were put in positions that were not necessarily comfortable to us, but that helped us to overcome our fears (one of my big fears is speaking on camera). 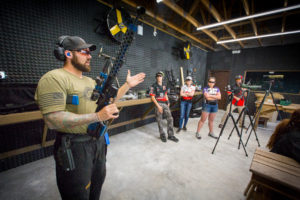 After hours, our instructors were still working. Photographer Dave Weaver was editing our photos throughout the evening (including during dinner), so that they would be done in time to give to us. We were pulled aside for interviews, many relating to tough Second Amendment oriented questions throughout the early evening. For the instructors, the work never stopped, but the quality of their teaching never diminished.

Something that I found very unique about this training was the way that the social media training was structured. As students, we learned about analytics, how to make a post that will perform well, structuring of captions to aid in our post performance, and using your biography as a marketing tool. Then we were able to plug our phones in to a TV screen and our instructor, TJ Kirgin, went through some of our recent posts, analytics, and stories with a fine tooth comb. He pointed out some things that I would never think of and advised on how to gear our posts towards always promoting the companies we represent. 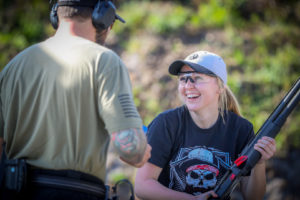 A key aspect of being a brand ambassador in the firearms community is being an advocate for our Second Amendment rights. We were put on the spot during several mock interviews regarding firearms legislation, our personal experience with firearms, and the treatment of gun owners in America. When put on camera it can be challenging to form a response to an emotion driven question at a moments notice, but being educated on current events and confident in our own experiences can create a credible and fluid answer in those situations.

My personal favorite part of the training was the bonus day. It was a scenario and lowlight based training where we practiced flashlight techniques, force on force, and just overall situational awareness. For the people in attendance that were involved in competitive shooting and those who are not, this was equally important. No matter what your background is, knowing how to defend yourself in a crisis is an incredibly important skill. This training is most likely the closest to being able to mimic an actual deadly threat. I got an adrenaline rush, tunnel vision, and quite literally felt as though my safety depended on my reactions. This is so important in today’s society where we never know the threats that we may face.

At the training we had ages 14 to early 70’s. There were people with backgrounds in business ownership, competitive shooting, law, and even a few high school students. We were a diverse group, but the building of knowledge between such a wide variety of people helped to solidify our overall comprehension of the material. In all honesty, I walked away with more information than I ever understood was available. I was given a thumb drive full of videos, pictures, and emailed key information after the training to ensure I had all of the tools that I need to succeed.

The support that was given to the Ambassador Academy was very encouraging and showed that there are companies that will go above and beyond to support the building of good brand ambassadors. Each student was give a “swag bag.” We received an awesome jersey from techwear (pictured in the group photo), a Streamlight flashlight, a Recon Medical tourniquet, a laser engraved Ambassador Academy Magpul P-Mag, and a 5.11 Rush MOAB 10 Backpack. The NSSF also was a large supporter of the Ambassador Academy which shows their enthusiasm in growing not only the shooting sports, but the Second Amendment Community as a while.

My expectations of this training were high, but I did not know what to specifically expect. After attending the Ambassador Academy, I have a great understanding of the importance of legitimacy and genuineness in business dealings. We, as brand ambassadors, should be held to the highest standard and not be seeking only the “free stuff.” Nothing is truly free and we must work our hardest to give back the companies and community that invests in us. 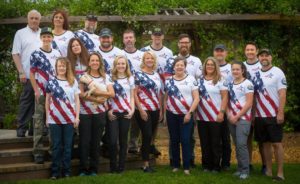