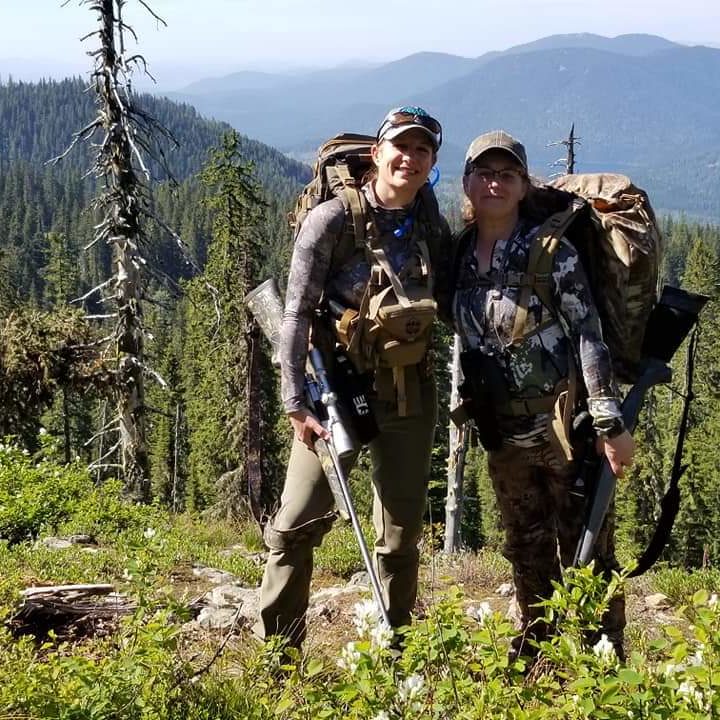 WHEN YOUR BEAR HUNT GOES SOUTH

What started out as a 7 day black bear hunt in Northern Idaho turned into so much more in a matter of moments.

Day one was awesome and we spotted our first bear, as hunting goes we were on the wrong side of the canyon and it was getting late so we made a plan for the next morning.  We executed our plan flawlessly but the bear was not anywhere to be seen in the thick brush. However Heather has an amazing eye for bears and spotted one across the drainage.  It was early enough in the morning that we could make it over there, so away we went. As we made our way to the rock face that was going to be the perfect vantage point we walked past a huge pile of bear scat and suddenly you know that this was not likely from a black bear.  Shortly after seeing that we saw what was more than likely that bears bed and it was huge. We stopped right then and there and said that we would not be here past dark, it would be too dangerous.

Once on top of that rock we glassed and watched hoping to catch a glimpse of one of those bears that we had seen. This country was awesomely huge but the vine maples and brush was so thick.   As time passed we decided we needed to make our way back out, we knew that we had found a great spot to hunt so we would be back tomorrow.

Around 3:30 PM we had just crossed this little creek and as Heather was making her way through the maples all I heard was a scream and as she fell and slid down the small embankment her right foot was facing an unnatural direction.  John came running and Heather said that she had broken her leg. We instantly asked the Lord to help us not only to make her comfortable, but to guide us. John and I went to gathering sticks to make splint. Once we got her leg splinted we stood her up to see if there was anyway of her walking.  That was not an option, but she wanted to get out of that creek area so badly, she knew that was a perfect spot for a bear to be on such a hot day. She told us that she thought she could drag herself out. So away she went pulling herself through the rocks and brush just fighting through the pain.

She made her way into this small opening and that is where plan B went into effect.  John would hike out to the truck and get help while Heather and I stayed there and prepared for what might be a night in the backcountry.   John hated to leave his hurting wife behind, but someone was going to have to go for help. Heather and I prepared for the worst case of having to spend the night out there.  We got her as comfortable as possible with her leg propped up on a rock. I built a fire pit right next to her and cleared away all of the greenery. Collected as much wood as I could find nearby and we talked.  I asked her a million questions just trying to keep her mind off of her leg. We watched elk feed on the hillside and I told her stories.

All of the sudden we were startled by the sound of the radio.  John had made it to a spot where he had cell service and was able to contact us via radio.  They were going to send a helicopter in for Heather. Praise the Lord! He didn’t know if they would be taking me out or not, I didn’t want to stay out there but, Heather was all that mattered at this point.  I strung flagging ribbon all around us. Heather kept apologizing for messing up our hunt. But I kept telling her that she just owes me another one next spring. She wasn’t getting out of it this easy. As time passed she was getting worse.  I was getting concerned, but we knew help was on the way. I had given her a flashlight and told her that as soon as that chopper was in sight to shine that thing up in the air so that they could see us.

It was close to 9:00 PM when we heard that amazing sound of the helicopter.  I yelled at Heather to turn her light on, and her and I waved our lights while they circled us a few times.  To make a long story not as long, they hadn’t planned on taking me out, but the pilot said if we could do it fast then they would take me.  And even with Heather in so much pain and going into shock she told them that they couldn’t leave me. They got both of us out of there safely.

Heathers breaks in her leg were pretty bad but she will make a full recovery and be ready for our hunt next spring.  Her husband was key in making everything come together and get us out of there. But more than what any of us did the Lord gave us the strength and wisdom to get out of there safely.

Definitive Method for Locking Back Your Handgun’s Slide
December 21, 2020

Did you know today is GIVING TUESDAY!
December 1, 2020